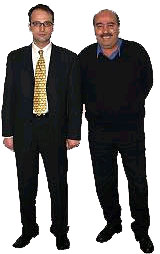 Mr. Hüseyin Erze comes from south-west Turkey. He was born on 17th January 1941 in the Turkish town of Darica. In 1965 Mr. Erze immigrated to the Federal Republic of Germany as guest worker. As most of the immigrants during this peak time of immigration he applied for work in industry and was employed until 1974.

From 1974 Mr. Erze worked independently and was engaged in the food trade, in which he successfully worked until 1980. In the same year Mr. Erze opened a bakery, which produced different types of bread, flat loafs, types of "börek", pita bread and fresh Lahmacun and is still producing these

The increasing demand of German customers led Mr. Erze to the decision to offer deep frozen Lahmacun from within his range of products. After a long time of professional experience and with regard to the increasing importance of Turkish products on the food market, at the beginning of 2001 Mr. Erze decided to extend the selling of his deep frozen products to other European countries, such as Greece, Spain, France, Belgium and the Netherlands

At a site, 800 m from the highway A2, one can find die production complex of the Erze Company deep freeze bakery. It is one of two sites there managed by Süleyman Erze for the company.

The deep freeze bakery of Erze is an independent enterprise for the production of deep frozen, oriental meals for retailers and wholesalers. The company was founded in 1999 by Süleyman Erze, who has been engaged in the production of Lahmacun for already 21 years.

With the specialising in deep frozen foods, a new chapter of the commercial activities of Süleyman Erze was started. The site founded in 1999 within less than two years played a leading role within the activities of the Erzes.